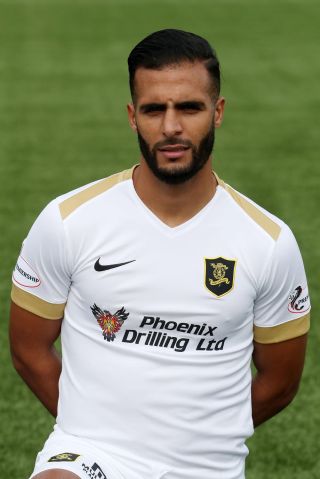 Hearts failed to win for a fourth league game in a row as 10-man Livingston held on for a goalless draw despite having Aymen Souda sent off early in the second half.

Chances for both sides were thin on the ground. Hearts’ Uche Ikpeazu fired straight at the goalkeeper while Jack McMillan saw a goalbound effort for Livingston cleared by Michael Smith.

The home side made two changes from the side that lost to Kilmarnock. Captain Alan Lithgow and Souda returned to the line-up with Lyndon Dykes and Ricki Lamie dropping out.

Hearts, in turn, made three changes from their draw with Rangers. In came Steven MacLean, Jamie Brandon and Andrew Irving for Jake Mulraney, Glenn Whelan and Aidy White.

It was a very cagey contest with neither side able to fashion many chances. Ikpeazu had a low drive for Hearts comfortably gathered by goalkeeper Matija Sarkic before Ryo Meshino tried his luck from just outside the box but saw his shot arrow wide of the far post.

The first real chance, however, fell to Livingston. Nicky Devlin picked out Scott Robinson with a neat cut-back but the striker’s side-footed effort lacked the pace to trouble Joel Pereira who blocked easily.

The goalkeeper was tested again minutes later by Souda’s shot but was able to push it around his post for a corner.

Hearts should have gone in front after 31 minutes. Sean Clare sent Ikpeazu through one-on-one with the goalkeeper but the striker could not place his shot past Sarkic. The visitors then claimed for a penalty after a tussle between Ikpeazu and Lithgow but referee Greg Aitken was not interested.

In a combative encounter that struggled to get going, Hearts had one final first half chance from a dead ball but Meshino’s free kick sailed high into the stand behind the goal.

Livingston were reduced to 10 men just three minutes into the second half. A high ball into the box was spilled by Pereira and Robinson knocked it on for Souda who attempted an acrobatic overhead kick. In doing so, though, he appeared to catch Christophe Berra and the referee rushed over to flash a red card for dangerous play.

Despite that setback, Livingston were next to threaten. The ball was worked wide to McMillan whose low shot appeared to be creeping in to the far corner only for Smith to clear.

Hearts pushed for a late winner but Livingston held strong to earn a point.