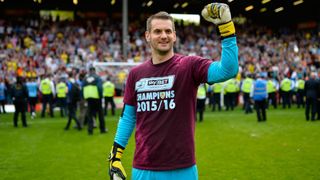 England goalkeeper Tom Heaton has signed a new four-year contract with Burnley, the club have announced.

The 30-year-old former Manchester United man has extended his stay with the newly promoted Premier League side until 2020.

"I am obviously over the moon to sign for another four years," the captain told the club's official website. "I'm really looking forward to the challenge, especially this season and whatever comes after that.

"Now I'm looking forward, as I say, to what the future is, to keep challenging myself and the position."

Heaton, who won his first cap for England in the friendly with Australia in May and was part of the Roy Hodgson's Euro 2016 squad, added to Clarets Player:  "It was certainly a dream of mine to get a cap. To get it is incredible and it’s made me hungry for more.

"I really want to kick on and push that boundary now and see where I can get to.

"I want to get better. I still feel like I've got more to come, still want to achieve more and all that comes from hard work.

"If things come with that, then great, but I think the focus will always be on putting the work on the training pitch and seeing where it takes me."