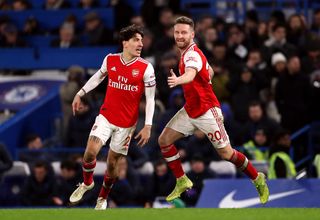 Jorginho coolly converted his second penalty in three matches after Luiz was sent off for hauling down Tammy Abraham just when the Chelsea striker was about to tap into an empty net.

Gabriel Martinelli pounced on a rare N’Golo Kante error to drag Arsenal level after the break however, and for large swathes this match appeared destined for a 1-1 draw despite Arsenal playing with 10 men since the 26th minute.

Azpilicueta and Bellerin thought differently, but in the eventual, breathless shake-up, Chelsea will wind up by far the more frustrated.

Shkodran Mustafi’s woeful backpass left Bernd Leno stranded at the top of the night. But rather than see his side concede, Luiz took out Abraham and sacrificed himself.

He trudged down the tunnel to the strains of the Chelsea fans sarcastically singing “David Luiz, he’s one of our own”.

Chelsea will be left to rue not turning that numerical advantage into a comfortable victory for some time to come.

The Blues avoided a defensive calamity of their own when Kepa escaped punishment for a shocking clearance to kick-start a turbulent night.

The Spain goalkeeper saw his languid clearance half charged down by Alexandre Lacazette, but Arsenal could make nothing of the possession.

Mustafi took a full-power Mateo Kovacic drive to the groin in a fine block, but that proved just the start of his travails.

Andreas Christensen nodded well wide from a corner when he should have opened the scoring, while Abraham headed too close to Bernd Leno.

Hudson-Odoi then clipped the top of the bar with a delightfully scooped chip from the left wing.

But after all that artistic inspiration it was a moment of desperate madness that gifted the Blues control.

Mustafi’s woefully under-hit back pass left Leno stranded on the edge of his area and Abraham zipped on to the ball, rounded the Gunners keeper and was about to roll the ball home when his old team-mate Luiz bundled him down from behind.

The inevitable red card led to a penalty, and Jorginho slotted home the spot-kick.

Chelsea pressed and pressed without any joy after the break, in another frustrating scenario in failing to unpick a low block.

Arsenal kept shape without the ball before Martinelli kept his head on a rare breakaway.

The 18-year-old seized on Kante’s uncharacteristic slip, raced through from halfway and then slotted coolly past Kepa.

Lacazette soon had the ball in the net again for Arsenal, only to see his effort chalked off for a clear offside.

Blues skipper Azpilicueta popped up with a fine finish in the dying stages to send relief around Stamford Bridge.

But that evaporated as Gunners captain Bellerin drilled home an even better strike to level the tie again.