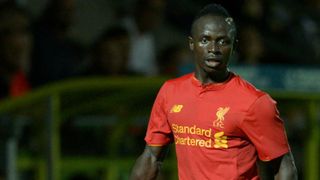 Liverpool captain Jordan Henderson hailed the "outstanding" Sadio Mane after the attacker starred in a 5-0 League Cup demolition of Burton Albion on Tuesday.

Mane was involved in four of Liverpool's goals, setting up Divock Origi for the opener and then crossing for Roberto Firmino to double the lead.

A Tom Naylor own goal sealed the result and Daniel Sturridge came off the bench to add two late strikes as Liverpool bounced back from a 2-0 Premier League loss at Burnley on Saturday.

"It was about making sure we worked as hard as possible," Henderson told Sky Sports.

Henderson felt Mane was the key man for the side with his direct running and tricky feet giving the hosts a torrid time at the Pirelli Stadium.

"You've seen in the games, Arsenal and today [what he can do]," Henderson said.

"We missed him at the weekend but we can't rely on him alone.

"We've got a great squad with talented players but he's been outstanding for us and he gives us something different - he can have a big season for us."

Mane said manager Jurgen Klopp had instructed him to improve his decision-making after leaving him out of the team for the loss at Turf Moor.

"I'm very happy because we won today and it was important to win," Mane told Sky Sports.

"The team was good today and we want to keep going for the next game of the season.

"[Klopp] wanted me to come in and make the right choices and I want to thank everyone at the club for their support, particularly the fans. I want to give my best for every game."