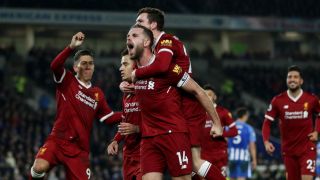 Jordan Henderson has the hardest job in world football by being Liverpool captain, according to manager Jurgen Klopp.

Henderson was left out of Liverpool's 7-0 romp against Spartak Moscow in midweek and his performances have come in for criticism on occasions this season.

Klopp launched a staunch defence of the England midfielder, who he assured of a place in the starting line-up for Sunday's Merseyside derby against Everton at Anfield, and feels the weight of following club great Steven Gerrard as Reds skipper is a considerable one.

"Even the captain cannot play all the time, he’s in a good moment and good shape," said the German.

"It made sense. I only spoke about it [starting Henderson at the weekend] because people would think ‘fantastic story, so make a s*** story of it.

"Sorry... but they are s*** stories [that Henderson has fallen out of favour]. Give me another word for it. He's such an important player for us, I don't get why I have to say that.

"I live in this city and I get how people are talking, but being skipper of Liverpool is the hardest job in world football. The man before was Steven Gerrard.

"I want everyone to respect Jordan Henderson as our skipper. But that doesn't mean he plays all the games."

Jürgen Klopp: "Jordan Henderson is our captain and such an important player for us. "The boss on his skipper: December 8, 2017

Liverpool have been in free-scoring form of late, with 5-1 and 3-0 Premier League wins at Brighton and Hove Albion and Stoke City respectively preceding the midweek rout.

They sit fourth in the table, a point above Arsenal in fifth, while back-to-back victories have lifted a Everton and their new manager Sam Allardyce up to 10th.