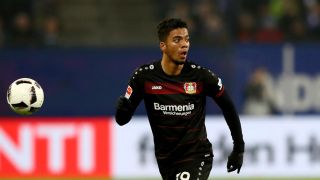 Benjamin Henrichs has signed a new contract with Bayer Leverkusen that will keep him at the club until June 2022.

The 20-year-old's previous contract was due to expire in 2020 and Bayern Munich were believed to be keeping a close eye on his situation at the BayArena.

But Henrichs has ended all speculation about his future by signing a two-year extension with Leverkusen.

"It is a great thing that the club where I have been playing for 13 years is giving me so many opportunities," the right-back stated.

"I am very happy to have become a professional footballer at Bayer 04 and to have even made it into Germany's national team.

"The people at Leverkusen have always believed in me and challenged me to keep developing. I now want to help the club get back to where it belongs after a difficult year."

The defender made his first-team debut in September 2015 and has developed into a key figure this term, making 36 appearances in all competitions.