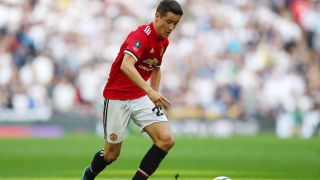 Ander Herrera believes Manchester United are heading in the right direction under Jose Mourinho ahead of another Wembley visit.

Mourinho's men face Chelsea in the FA Cup final on Saturday, looking to add a trophy to their second-placed finish in the Premier League.

And Herrera, 28, believes this season has been further proof the team is continuing to improve.

"I think we are going in the right direction," he told UK newspapers.

"Let's put everything in perspective. Two years ago, we were fifth in the Premier League and FA Cup winners. Last season we won three trophies and were sixth in the league. This season – second in the league and we can win a trophy, the FA Cup.

"After Sir Alex Ferguson, we've had four years of transition and now I think the club is going up with this manager.

"This club is about winning titles and reaching finals and this will be my fifth final in two years. If you talk with other football players, they would like to be in our position."

Herrera has been at United since 2014, but his contract at Old Trafford expires next year.

However, the two-time Spain international said he was happy at United and would continue to fight for his spot.

"My future is the cup final. I want to be here next season and unless the club sack me, I will be here in pre-season and fight to keep adding games to my total. In football, what today is black is tomorrow white," Herrera said.

"So, if you think about what can happen in the summer, maybe the club signs four midfielders and they don't want me anymore.

"The only thing I can do is train good today and train good tomorrow. That's all I can say – and of course if the club wants to talk to me I will listen to them because I am happy here."