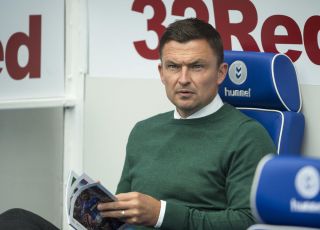 Hibernian remain without a victory in the Premiership since the opening day of the campaign after blowing a 2-0 lead to draw against Ross County.

The hosts appeared on easy street at Easter Road after goals from Daryl Horgan and Scott Allan gave them a deserved advantage, having also struck the woodwork through Melker Hallberg and Flo Kamberi.

However, the Hibees’ fragility has now become a running theme and they collapsed during a dismal final 15 minutes, with County substitutes Brian Graham and Joe Chalmers rescuing a dramatic point.

The capital club remain in the relegation places and left the field to a cacophony of jeers.

Embattled Paul Heckingbottom, watching from the director’s box as he served the second game of his two-match touchline ban, saw his side rattle the woodwork with just five minutes on the clock as Hallberg curled a sumptuous free-kick off the angle of bar and post.

Hibs right-back Jason Naismith almost came back to haunt his former employers when he drifted into the back post unmarked to meet a fine Joe Newell cross, only to blaze a wasteful effort over the bar.

Kamberi was then denied by a wonderful near-post save by County custodian Ross Laidlaw, while a fine block by Keith Watson thwarted Josh Vela on the cusp of half-time.

However, the Highlanders’ stubborn resistance was finally breached as an inspired substitution at the interval paid dividends within four minutes of the restart.

Horgan, who replaced Hallberg at the break, scampered onto a lofted Naismith pass and belied a tight angle to fizz a low drive beyond Laidlaw for an immediate impact.

Hibs swiftly doubled their advantage courtesy of a superb solo strike from Allan, with the mercurial playmaker surging in from the left flank before firing a low shot into the bottom corner from 20 yards.

Kamberi passed up a golden opportunity to put the game to bed when he rattled the post from point-blank range following more excellent work from Horgan. That was to prove costly.

To their credit, County did not wilt and halved arrears with 15 minutes to play courtesy of a wonderful curling Graham shot from the edge of the box.

No side have been more wasteful from winning positions than Hibs this term and they succumbed to those failings yet again when Chalmers, afforded all the space in the world 25 yards from goal, lashed a stunning low drive past Chris Maxwell.

Hibs have now dropped 13 points after leading and, as the visitors from the Highlands toasted an unlikely share of the spoils, a vocal portion of the home support called for Heckingbottom’s resignation at full-time.