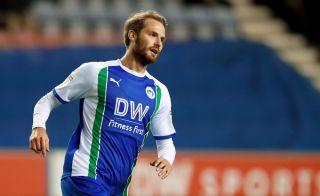 A flurry of transfer activity at Stoke saw five new signings announced by the Sky Bet Championship side on Tuesday.

The Potters, under boss Nathan Jones, confirmed the acquisitions of a quintet of players – including former Manchester United youngster Nick Powell.

Powell moves to Stoke after his deal with Wigan expired and is joined by fellow free transfer signings Lee Gregory, Adam Davies and Jordan Cousins.

Stoke also confirmed the £2million signing of centre-back Liam Lindsay from Barnsley as Jones looks to build a squad that can challenge for promotion.

Davies, a Wales international, was also signed from the Tykes while Gregory comes in from Millwall and Cousins agreed terms after leaving QPR.

They are the first new faces into the Bet365 Stadium this summer as the club look to improve on a 16th-placed finish last year.