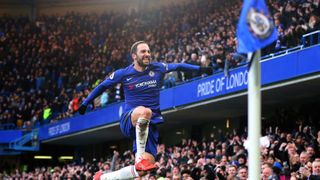 Gonzalo Higuain may have struggled at AC Milan but former Rossoneri team-mate Alessio Romagnoli believes the Chelsea striker is the best in the world.

Higuain scored six league goals in the first half of the Serie A season but his form over those 15 games saw the Argentina striker often criticised.

The 31-year-old swapped Italy for England last month after Chelsea agreed a loan deal with parent club Juventus, Milan letting the forward go after agreeing the transfer of Krzysztof Piatek from Genoa.

After failing to score in his first two Chelsea matches, Higuain looked sharp against Huddersfield Town as he scored a brace against in the 5-0 victory.

Milan captain Romagnoli was sad to see the former Real Madrid and Napoli striker leave San Siro, describing him as one of the elite.

"I still think he is the best striker in the world," said the defender, as quoted by Calciomercato.

"I am sorry he decided to leave but we respect his decision. He is a friend of mine and if he is happy I am ok with it.

"Now we have other players that won't make us regret his departure."

What a finish from @g_higuain to score his first goal for the Blues against Huddersfield! pic.twitter.com/bNYEHNnyPK— Chelsea FC (@ChelseaFC) February 5, 2019

The other player he refers to is Piatek, the Polish forward having made a superb start to life in Milan with three goals in as many games in all competitions.

"We enjoy having him [Piatek] here and we hope he can keep scoring at least one goal per game," he added.

"We hope to win many more games so we can reach the Champions League.

"Piatek's impressed me with his desire and hunger. You can see he wants to show what he's all about and that's important. He's young and on the right path."