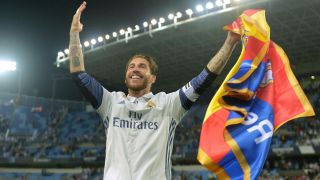 Gonzalo Higuain says he still has great affection for Sergio Ramos as he prepares to do battle with his former team-mate when Juventus take on Real Madrid in the Champions League final.

The two teams meet on Saturday in Cardiff, Madrid looking to defend their continental crown as Juve target their first win in the competition since 1996.

Higuain spent seven prolific seasons at the Santiago Bernabeu earlier in his career, although Champions League glory eluded him.

The striker concedes his past with Madrid adds intrigue to the game on a personal level and discussed his bond with Ramos, who scored in his side's 2014 and 2016 final victories over Atletico Madrid and is likely to be his direct opponent when the match begins.

"I have a lot of affection for him and his family and we still send each other messages.

"Football sometimes places you in situations like this one where I will face Real Madrid in the final.

"The fact that I played for Real earlier in my career adds some extra intrigue to the game for me personally but I can't stress how much I want to win the Champions League for Juventus.

"It will be evenly matched. I'm expecting a very difficult game – they are used to playing these kind of games.

"I was there for seven years and I know that very well, but we want to bring this trophy which Juve have been pursuing for years home."

Higuain insists he does not mind if he scores as long as Juve taste victory in a match he hopes can secure a historic treble.

"I hope we win, then it doesn't matter who scores," he said. "I came here to win. Right now we are doing well, we have won two competitions and we hope to win another in a few days.

"We have been praised from all corners for what we have done in Europe this season - all that is missing is the final step.

"Without doubt, the time has come. We have been working for this and, hopefully our efforts will be rewarded with victory. Winning the Champions League would be an extraordinary thing."