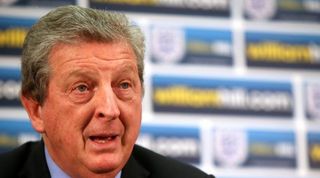 England will take 12 players to South America who have never played at a major championship but Hodgson insists that their form was simply too good to deny.

"I think that they've imposed themselves upon on me," the former Liverpool boss said. "I don't know that I set out to take them.

"They've done so well, played so well and been so effective in their club teams…they have really imposed themselves and their ability, if you like, on my thinking.

"I'm sure that in October, if I had to pick a squad that qualified us, it might have been different. A lot of water has passed under the bridge since then.

"You can't ignore what people are doing on a week-to-week, day-to-day basis with their club side.

Liverpool captain Steven Gerrard will lead the side again, and the likes of Wayne Rooney and Frank Lampard will help in what Hodgson hopes is a winning blend of youth and experience – something he was keen to point out.

"The balance is still quite good," he added.

"It would be wrong, I think, to focus totally on the fact that there are some young and less experienced (players), because everyone is inexperienced until the time he gets to do the job.

"Steven is exceptionally mentally strong. I do not expect Steven to have any hangover from that (Liverpool's Premier League campaign). He loves Liverpool and he loves England.

"We think his leadership qualities and the qualities that he will bring to us in Brazil, and the ability he has as a player, make him a man who fully deserves his selection.

"Wayne is so determined that when we meet on the 19th (of May) that he will be ready to join up. His attitude and desire are spot-on and cannot be better."

England are significant outsiders to win the World Cup and will have to focus on getting out of a group that contains Italy, Uruguay and Costa Rica first.

But Hodgson is still hopeful they can win football's grandest prize, suggesting that it was pointless to think otherwise.

"Yes, of course I believe the squad can win the World Cup," he added.

"You've got to have some belief. But they're empty words. I'm certain that (Luiz Felipe) Scolari is saying Brazil can win it…why should we say otherwise?"

Ashley Cole's exclusion was confirmed by the Chelsea left-back on Sunday and he promptly announced his retirement, with Hodgson describing the decision to omit the 107-cap defender as "unbelievably hard".