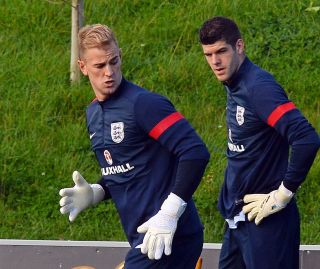 Manchester City goalkeeper Hart has come under fire for a series of errors this season, and his dip in form has seen him lose his spot in Manuel Pellegrini's starting XI to understudy Costel Pantilimon.

That also left a question mark over the 26-year-old's status as England's regular number one, with Celtic stopper Forster coming to prominence after some fine performances in the UEFA Champions League.

Hodgson, though, has confirmed that he is set to retain faith in Hart, with some observers suggesting that Forster is being hindered by playing in the Scottish top-flight.

But the England coach has refuted that is the case, and insisted it is purely down to Hart's form for the national side.

"We played 10 matches in (FIFA World Cup) qualifiers and he conceded four goals and that's equal best with Spain.

"I would deny that it is being in the SPL that has kept Fraser out of the England team, it is the fact Joe Hart is there.

"The fact we admire Fraser Forster and think that he is a good goalkeeper has been proved by the fact that he is always in our squad."