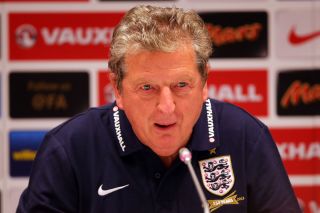 But he has every faith in his squad to go on and book their place in Brazil next year when they face Poland in their final qualifier at Wembley on Tuesday.

Hodgson's men retained their unbeaten qualifying record with a comfortable 4-1 victory over Montenegro on Friday, as a man-of-the-match display from Andros Townsend - capped off by a stunning second-half goal - gave them the win they needed.

The result kept them in control of Group H, but Hodgson knows that only a similar outcome against Poland will guarantee automatic passage to the finals.

"The job's half done," he insisted. "If we want to qualify direct we need to win against Poland on Tuesday night. That won't be easy.

"That game will be very difficult. I watched them (Poland), in the first half they played very well against Ukraine (a 1-0 defeat on Friday). They had the best goal-scoring opportunities.

"If they play as well against us on Tuesday as they did against Ukraine in the first half then it will be a tough game.

"But I always back the players. I trust them.

"We are still unbeaten in this qualifying group. We are capable of going unbeaten in the 10th (game) and with the backing we got from the fans and playing at Wembley I have got to back them. I would be foolish not to."