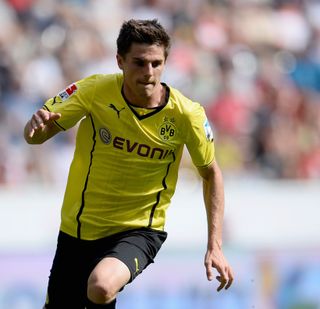 The 21-year-old winger made the switch to the Signal Iduna Park from Hoffenheim in 2011, and made his first-team bow in Dortmund's 3-1 league victory against his former side in December 2012.

Hofmann has started the new campaign in impressive fashion, scoring his first goal for the club in the team's 2-1 win over Eintracht Braunschweig, as well as contributing two assists.

And he has been rewarded for that start with a contract that will see him stay at the Bundesliga runners-up until June 2018.

Speaking to the club's official website, Hofmann said: "I've always been nurtured by BVB, I made the step from the reserves to the first team and I know that I will be given the confidence, support and patience to keep on improving.

"On a footballing and emotional level, Borussia Dortmund's overall package is hard to beat for a young player like me. I'm delighted to continue being a part of this great BVB family."

Sporting director Michael Zorc was delighted to tie Hofmann to a new deal, and expects the Germany Under-21 international to continue his impressive development.

"Jonas has made great strides forward in the last couple of months, but he has not achieved the end of his development just yet," he said.

"We are pleased to work with him long-term and accompany him on what hopefully will be the best part of his career."