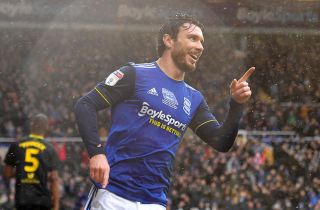 Hogan continued his rich vein of form by scoring twice, taking his tally to six goals in seven matches since arriving on loan from Aston Villa.

He opened the scoring on 24 minutes but two goals in the space of four second-half minutes turned the tide in Rangers’ favour, with Marc Pugh equalising before Jordan Hugill scored his 13th goal of the season.

Blues’ misery appeared to be compounded by an injury to Jeremie Bela, who was carried off on a stretcher following a challenge by Pugh midway through the second half.

But Hogan hauled them level with 10 minutes remaining at the Kiyan Prince Foundation Stadium.

He netted his first after being found in acres of space by a routine ball over the top from fellow former Brentford man Maxime Colin.

The striker poked past onrushing keeper Liam Kelly, and a desperate attempt by Conor Masterson to prevent him adding the finishing touch only resulted in Hogan being chopped down a couple of yards from the line and the ball trickling in without a finishing touch being needed.

Earlier, Hugill had a goal disallowed for offside following a slick Rangers move.

Bright Osayi-Samuel played a delightful pass between three Birmingham defenders to release Angel Rangel, whose low cross from the right was tapped in by Hugill from close range.

And the on-loan West Ham forward put the hosts ahead four minutes later.

Osayi-Samuel exchanged passes with Eze on the right and crossed towards Hugill, who got in front of Blues defender Marc Roberts to score from the edge of the six-yard box.

In-form winger Osayi-Samuel was outstanding throughout.

As well was setting up Hugill, he was instrumental in the equaliser as the free-kick which led to Pugh scoring was awarded after Osayi-Samiuel was pulled down by left-back Christian Pedersen, who was given a torrid afternoon.

However, Rangers were pegged back after failing to deal with Dan Crowley’s right-wing corner.

Gary Gardner beat Geoff Cameron in the air and the ball dropped to Hogan, who made no mistake – and would almost certainly have completed a hat-trick but for a last-ditch tackle by Masterson in stoppage time.