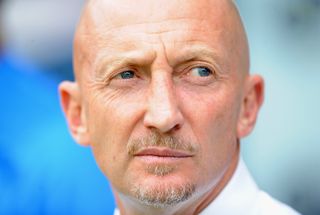 The 50-year-old was forced to watch from the stands at Old Trafford after being banned from the touchline for two matches following an improper conduct charge by the Football Association, as goals from Robin van Persie and Wayne Rooney condemned Palace to defeat.

Van Persie slammed home a penalty on the stroke of half-time after Kagisho Dikgacoi was adjudged to have brought down Ashley Young in the box.

The midfielder was subsequently sent off, with Palace protesting that the challenge was outside the box, but having received his ban following a vocal outburst in the aftermath of his side's 1-0 opening-day defeat against Tottenham last month, Holloway chose to stay tight-lipped this time around.

"My opinion doesn't count because the result is the result and I have just got to deal with it," he told BT Sport.

"I literally can't afford it so I can't say a word (about the penalty and sending off) and let everyone else judge it.

"He (the referee) has a difficult job to do though, especially at Old Trafford which such a noisy partisan crowd.

"I am very disappointed we lost the game but not in the manner in which we lost it or the way my players behaved and conducted themselves."