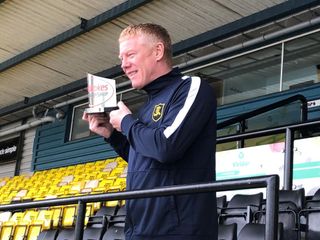 Now the Lions manager has echoed the calls from Hamilton counterpart Brian Rice for the introduction of technology to ensure games are not left a blow-out by wild conditions.

Holt saw his side swept out of the William Hill Scottish Cup as they battled both Inverness and 60mph gusts.

He refused to blame the blustery conditions for his side’s 1-0 defeat in the Highlands but reckons paying customers were short-changed by a clash lacking entertainment value.

Rice has similar feelings about playing matches in the eye of the storm and believes wind meters should be introduced and matches postponed if necessary to protect the sport’s reputation north of the border.

Now Holt says: “I saw Chipper’s article and I agree with him. Something has to be done.

“We’re in the entertainment business and people pay good money to come watch.

“Yeah, Inverness will be delighted they won, but there’s not one fan who can say they enjoyed the match on Saturday because there was no free-flowing football on show.

“I’m not taking it away from Inverness because we should have defended the goal better. But there was more fun having a laugh at the ball getting kicked out the park or someone trying to take a corner three times because it was blowing away.

“Wee Scotty Pittman was running with the ball but the wind took it away from him and he ended up chasing it like a dog chasing a ball round a park. That’s not football.

“It has to be looked at because the wind is the one thing you can’t play in.

“Looking at the games across the weekend, I don’t think there was one good game of football played. It’s the fifth round of the Scottish Cup and that’s not the advert we want for our game.

“If you looked at social media it was a running joke. People were taking the mickey because it was laughable.”

Holt hopes the winds will have calmed as they look to get back on track when St Mirren visit the Tony Macaroni Arena on Wednesday night.

Saturday’s defeat was Livi’s second successively in the Highlands after last week’s loss to Ross County, but Holt is maintaining an optimistic outlook after being named the Ladbrokes Premiership’s manager of the month for January.

And he has backed his team to roar back to winning ways as they chase down fourth-placed Aberdeen and a place in Europe.

He said: “We improved. We’ve improved the quality of the squad. The professionalism has raised too.

“And I think we’ll have a better second half to the season this year than we did last.

“We did take people by surprise last term because we were new to the league. This year we had to change and adapt but I think the new players we’ve brought in are ready to kick on and we’ll only get stronger.”