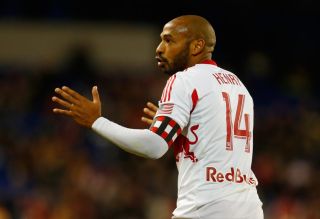 The 37-year-old striker is coming towards the end of his deal with the MLS franchise after more than four years at the Red Bull Arena.

Houllier dropped a strong hint that this contract will be his last and stated that if he does continue his playing career, it is unlikely to be with the Red Bulls.

"He views this as the end of his career and it's possible these are his last matches," Houllier told francefootball.fr.

"Perhaps he will go and play somewhere else, but it will not be with the Red Bulls."

Henry started his career with Monaco where he collected the Ligue 1 title before moving to Juventus in 1999.

After a short and unfruitful spell in Turin he joined Arsenal where he enjoyed arguably his finest spell as a player, winning the Premier League twice and claiming the FA Cup on three occasions.

More success followed when he moved to La Liga giants Barcelona and he counts two league titles, a Copa del Rey and the UEFA Champions League on his resume from his time in Spain.

Henry's domestic awards have been translated on the international scene, too, he won the 1998 World Cup on home soil with France before adding the 2000 European Championship.