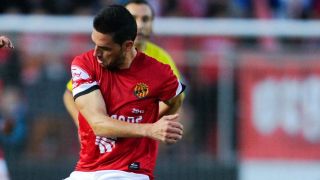 The two players are both coming off seasons in the Segunda Division, Spain’s second tier.

The 30-year-old Rocha spent the last two and a half seasons with Gimnastic de Tarragona, helping the club achieve promotion from the Segunda B after the 2014-15 season. The midfielder, and former Gimnastic captain, had scored eight goals in each of the proceeding campaigns, but had not found the net in 20 league starts in 2015-16.

Iniguez, 30, is a central defender who has spent most of his career in the second division, most recently with Albacete in the 15-16 campaign, where he played in nine league games. He had spent the previous three seasons at Mallorca, also of the Segunda Division.

“During the offseason, we’ve focused on continuing to add quality players to our roster,” Dynamo general manager Matt Jordan said in a statement on the team’s official website. “We feel by adding two players with the experience, pedigree and character that David and Agus possess strengthens our group in preparation for the upcoming season.”

The Dynamo, who missed the playoffs last year, have also added Jalil Anibaba, Andrew Wenger, Sebastien Ibeagha, and Cristian Maidana this offseason. Their season kicks off Mar.6 against the New England Revolution.