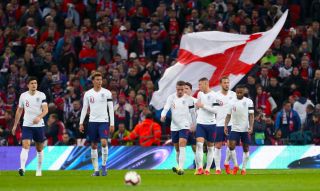 The Euro 2020 qualifying campaign is heading towards its conclusion, with places still up for grabs in next summer’s tournament.

Here, the PA news agency takes a look how things stand for England, Scotland, Wales, Northern Ireland and the Republic of Ireland.

Gareth Southgate’s side have won all four of their Group A fixtures so far and sit top of the table.

Victory over the Czech Republic and Bulgaria will make sure of a place at Euro 2020, where Wembley will play host to both semi-finals and the final on July 12.

The 4-0 defeat to Russia means Steve Clarke’s men now have no chance of a top-two finish in Group I after losing five out of their seven matches so far.

However, Scotland do have the ‘second chance’ route via the play-offs, which came from winning their Nations League group.

The qualifying play-offs will take place in March 2020, with four places on offer to join the other 20 countries.

These, though, will be for a team which comes through a two-legged semi-final and final, the seeding for the pairings based on performances from the Nations League.

After a 1-1 draw in Slovakia, Ryan Giggs’ side are fourth in Group E, but only three points off second place – and crucially with a match in hand.

The home game against World Cup finalists Croatia on October 13 will be key, with the final two fixtures away to Azerbaijan and then against Hungary in Cardiff.

😔 After a massive effort from our lads it finishes 3-1 to @OnsOranje in Rotterdam #GAWApic.twitter.com/El4tlbQLYH— Northern Ireland (@NorthernIreland) October 10, 2019

Manager Michael O’Neill put on a brave face following the 3-1 defeat against Holland in Rotterdam, where Northern Ireland had taken the lead before suffering a late collapse.

Having also lost 2-0 against Germany in Belfast, Northern Ireland are now third in the standings, level on points with the top two but having played a match more.

The Green and White Army are left needing an unlikely maximum haul from games next month at home to the Dutch and away in Frankfurt to get out of Group C.

Mick McCarthy’s squad are top of Group D, two points clear of Denmark and unbeaten so far from five matches with three wins.

Victory away to Georgia in Tbilisi on Saturday would further strengthen the Republic’s position, with Denmark hosting Switzerland.

The Republic then play in Geneva on October 15 and will host Denmark in their last fixture next month.

However, with both Denmark and Switzerland still to play bottom team Gibraltar – a three-point banker – the qualification shake-up looks set to be a tense finale which could yet come down to head-to-head results.