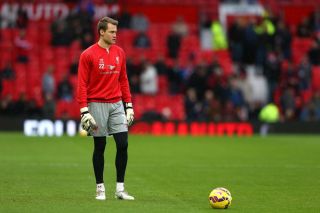 Mignolet was hailed as "one of the top goalkeepers in the Premier League" by Liverpool boss Brendan Rodgers when he arrived at Anfield from Sunderland in June 2013.

But the Belgium international's performance levels have dipped this season and Rodgers sent out a clear statement of intent by dropping him for last Sunday's Premier League clash at Manchester United in favour of Brad Jones, who has been promised a prolonged run in the first team.

Howard has sympathy for Mignolet and is blunt over what could happen next for the 26-year-old.

"I'll be honest and I think it's a hard road back now," Howard is quoted as saying by the Daily Mirror. "I think when you get taken out of the team, sometimes there's no way back.

"It's unfortunate for a goalkeeper, but that's how it is.

"You can't come on and play the last 20 or 30 minutes and put a good shift in and win a few tackles.

"It's all or nothing with goalkeepers."

On Mignolet's plight, Howard continued: "I feel for Simon, even though he's a Red.

"It's hard for a goalkeeper. I think the quote is 'taking the goalkeeper out of the spotlight', but I think it only sheds more light on him.

"I think you have to go with a goalkeeper and appreciate there will be ups and downs, especially in this league.

"It's so fast, it's so rough, it's a tough league for goalkeepers."

Howard was talking to the media at the launch of his autobiography, 'The Keeper '.