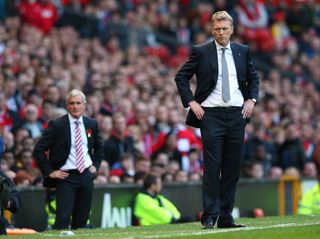 Hughes' Stoke City allowed their lead to slip away twice as they fell to a 3-2 defeat at Old Trafford on Saturday, with Wayne Rooney and Javier Hernandez scoring in the last 12 minutes to rescue three points for the hosts.

And the 49-year-old former United striker believes his opposite number will be given time to impose his philosophy after picking up just four victories from his opening nine Premier League fixtures in charge of the champions.

"No, come on, what’s he had? Nine games?" Hughes told the Daily Mail when quizzed on Moyes' start . "David Moyes will be manager for a long time.

"He'll be given time and has good players who'll win enough games for him this year, even if it's a difficult season. Once he gets his philosophy over, he'll be fine."

Hughes drew on his own United memories to add some perspective to the club's current plight.

"They are still in the top half of the table but teams will come here and try to have a go — which maybe hasn't been the case before."