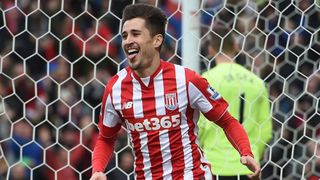 Reports have claimed the former Barcelona man could be heading for the exit at the Britannia Stadium in January with a number of clubs looking to trigger a supposed release caveat.

The Spaniard has been a consistent performer for Stoke this term after returning from injury and Hughes insists there is no truth to such rumours.

"I take transfer speculation with a pinch of salt. I don't know where the stories come from and a lot come with no substance."

Bojan has formed part of a formidable attacking trio for Stoke alongside Xherdan Shaqiri and Marko Arnautovic, with Hughes eager to secure the Austrian's long-term future.

"The intention is to get Marko Arnautovic pinned down on a long-term deal like Erik Pieters. It's just taking a little longer," he said.

Stoke entertain Liverpool in the League Cup semi-final first leg on Tuesday and Hughes admitted the appeal of Geoff Cameron's dismissal in the last-gasp 2-1 defeat to West Brom on Saturday is hampering his preparations.

"We will have an indication by this evening whether we will have Geoff Cameron available. It hinders my thinking for now," Hughes continued.

"We're frustrated by the weekend's result. We went into the game in good form and we just dipped below what we are capable of.

"We don't want to go to Anfield no longer being in the tie. Our home form has been good. If we hit our levels, we can cause real problems."