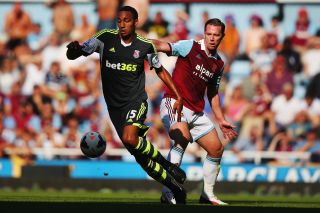 The Frenchman, who joined Stoke from Blackburn last year, played the full 90 minutes in his team's 1-0 win over West Ham on Saturday, and has played in every minute of their Premier League games so far this term

Hughes admits he did not believe the Frenchman was capable of turning in regular key performances, but is delighted with the start he has made.

"Until you work with players on a daily basis you can underestimate their talent," he said.

"I was one who maybe didn't put Steven into the bracket of a top Premier League player.

"He still has faults that he has to work on, he understands that, but the way we play will bring the best out of him."