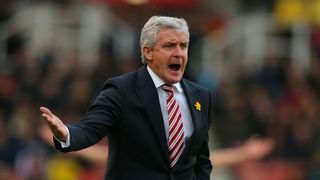 Peter Crouch netted the only goal of a drab affair at the Britannia Stadium, the striker heading home Charlie Adam's deep cross after 72 minutes shortly after coming off the bench.

However, Hughes was angered by a challenge from Maynor Figueroa that forced Ireland off at half-time.

"I'm really pleased, we've got 39 points now, but I have to say the day's events are tempered somewhat because we've got Stephen Ireland whose been on the end of a horrendous tackle in the first half," said the Welshman.

"It should've been a straight red card. He's come in at half-time and his rolled sock down, and everyone is shocked by the gash on his calf.

"I'm highlighting it because on the day I thought the referee [Neil Swarbrick] was poor. It's astounding the ref hasn’t sent the lad straight off, they need to be better.

"The assistant referee was only 10 yards away, he needs to see that challenge. There's been a lot of debate about a certain challenge in the Chelsea-Burnley match - I think it was worse than that.

"We just ask for the key moments to be refereed correctly, and the main gripe at the moment is that is not happening.

"Although pleased and happy, we're upset by the challenge and what it might entail for Stevie."

Victory keeps Stoke in the top half of the Premier League table, and Hughes felt his side deserved the three points having posed more of an attacking threat.

"We were the team deserving of the break," he added. "I thought we were the only team with the attitude to the game to be positive and show ambition."