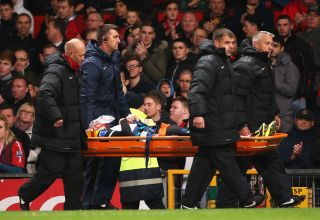 The Norwich City midfielder went down in the 56th minute of the League Cup fourth-round tie after a clash of heads with Rafael da Silva, and was eventually substituted after receiving nine minutes' treatment in the penalty area.

And manager Hughton revealed Snodgrass had been taken to for medical assessment with suspected concussion.

"He's in hospital at the moment - it's a precautionary one," he said. "He was out, it is concussion and we're hoping that's all it is.

"The medical people were very quickly onto it. They've done the right thing and he's away just as a precaution, but we're hoping he'll be okay."

In a double blow for Norwich, Nathan Redmond also picked up an injury in the match, which saw Javier Hernandez net twice, with Phil Jones and Fabio da Silva adding a goal each to send United comfortably into the quarter-finals.

"Nathan just pulled a muscle in his hip," added Hughton. "How bad that will be, we don't know.

"He was sore for that period of time and it wasn't one where he could continue.

"We just need to make sure, because we've picked up a few injuries - we lost Alex Tettey in the last game.

"We've got a tight squad and we've just got to make sure we're not picking up any more injuries."