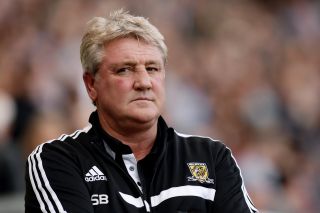 A number of players are unavailable to the 52-year-old at White Hart Lane, including goalkeeper Allan McGregor, who is facing up to six weeks on the sidelines with a thigh problem.

Sone Aluko (calf) and Danny Graham are among the other injury victims for Hull, although Bruce is eager to remain upbeat.

"We'll have six or seven (players) missing, but we're looking forward to it," he said.

"The squad is as threadbare as we've seen it. We're struggling to fill the bench.

"(Sone) Aluko's injury isn't as bad as we first thought. (Danny) Graham's could have been much worse too, so we've got to be positive."

Bruce admits Hull face a stiff challenge against a Tottenham outfit expected to contend for Champions League qualification, but takes heart from his side's performances on the road so far this season.

"Spurs have invested very well over the summer and have become a major force," he told the club's official website.

"For me, they are a really good bet to be knocking on the door of the top four and to be trying for Champions League football when you see what they've done and how they've strengthened.

"But, as we've shown against Chelsea, Manchester City and Everton, we've been in the game. We maybe haven't taken anything from them, but we have competed and given those sides something to think about."