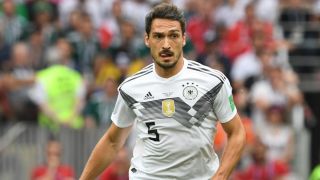 Mats Hummels is hoping to be fit to face Sweden as Germany look to bounce back from their opening game defeat to Mexico in World Cup Group F.

And Germany are likely to be without Hummels for Saturday's clash in Sochi, with Low confirming in his pre-match news conference that the Bayern Munich man had suffered a neck injury.

However, Hummels has taken to Twitter to express that he still has hope of being involved.

"Still having some hope for tomorrow, you simply don't want to have to watch such an important game," the centre-back tweeted.

Still having some hope for tomorrow, you simply don’t want to have to watch such an important game...June 22, 2018

That is in contrast to Germany's coach, who was adamant that Hummels would not be able to feature.

"Hummels won't be able to play [Saturday]. He hurt his neck [vertebrae] on Thursday and he hasn't improved [on Friday]," Low said.

"He cannot train but there's still some time. When things like that happen, it doesn't improve overnight."