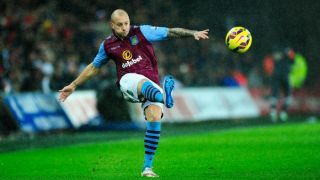 Alan Hutton has returned to training ahead of Aston Villa's Premier League clash with Everton on Saturday after missing the last four games due to an ankle injury.

The Scotland right-back has not featured since limping out of Villa's 3-1 defeat at Manchester United almost a month ago.

Villa manager Tim Sherwood revealed that Hutton will be assessed on the eve of his relegation-threatened side's game home encounter with Roberto Martinez's men.

Sherwood said on Thursday: "Alan Hutton is back in training. He has trained during the latter part of the week and will train tomorrow.

"We need as many bodies between now and the end of the season as possible. We'll assess him tomorrow."

Villa are just two points ahead of third-bottom Sunderland with four matches remaining and Dick Advocaat's side have a game in hand.