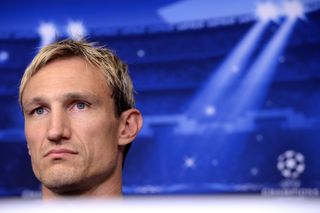 Leverkusen host the Ukrainian side at the BayArena on Wednesday in a crucial UEFA Champions League Group A clash.

The Germans are just one point behind both Manchester United and Shakhtar and need a victory to enhance their chances of progression to the knockout stage.

Despite the importance of the match, Hyypia says he does not expect Shakhtar to change their style and will go all-out to pressure his side.

"I think (Shakhtar) Donetsk will play attacking football. They have five or six attacking players from South America," Hyypia said.

"Those players are better in offence than defence. I think the way Shakhtar is going to play doesn't depend on if they are playing at home or away, so we have to be ready to defend well.

"Then we have to make profit out of the fact that the attacking players usually don't defend that much. We will get our chances and then we have to score some goals."

Leverkusen goalkeeper Bernd Leno expects a busy night between the sticks but is confident his side can rise to the challenge and keep the pace with group rivals United.

"Obviously it's going to be a tough match but I think we are pretty strong at home. So we are also able to win three points against a team like Shakhtar," Leno said.

"And the most important thing is to get a win out of a home match in the Champions League. That will be a basis for us to move on.

"So we expect a tough match against a team that has a good combination between experienced players and South American players in the attack, that usually are very technical. That's why it is going to be a really tough game."