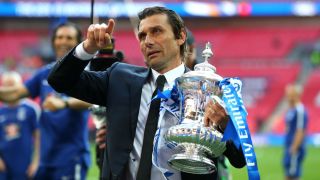 Antonio Conte declared he is a "serial winner" after Chelsea won the FA Cup on Saturday.

Eden Hazard's first-half penalty earned a battling 1-0 win against Manchester United at Wembley, ensuring the Italian has collected a trophy in each of his last five seasons as a club manager.

Speculation Conte could leave Chelsea has intensified this term and he indicated he had the chance to return to the Italian national team, whom he led between 2014 and 2016.

And after adding the FA Cup to last season's Premier League crown, Conte launched a passionate defence of his record.

"I think after two years the club knows me very well and if they want to continue to work with me, they know me," he said. "I can't change, nothing changes. My way is always the same.

"I have worked to build a strong mentality with my players and I can't change. And I think my past speaks very clear as a player and a manager.

"You can say what you want but I am a serial winner, I also showed this in a difficult moment for the club.

"I think I am showing this also today and I think we found the right way to win this trophy. I'm very happy for the players and for our fans and at the same time I'm happy for the club.

"The decision to judge me - in two seasons I brought two trophies to this club. I'm very happy."

1 - Chelsea are the first team to win the FA Cup after finishing runners-up in the previous season since Arsenal in 2002. Bouncebackability. May 19, 2018

Conte accepted Chelsea's failure to qualify for the Champions League is a blow, but stressed he expected the Blues to be tested throughout the campaign.

The Italian again suggested he was unhappy with the club's transfer dealings over the course of the season and claimed he had got as much as he could from the squad.

"I'm very satisfied because today was very difficult, very difficult to win in this moment," Conte said. "The FA Cup, against a really strong team like Manchester United, we are pleased because it wasn't easy.

"I'm very happy for our fans and for our players. They have deserved this win. To win an important trophy in this season for sure it was very difficult for many reasons.

"As you know very well I predicted at the start of the season it would be difficult, but despite this we finished fifth and then we won the FA Cup, we lost the semi-final against Arsenal in the EFL Cup and for sure to miss a place in the Champions League is not good for a club like Chelsea.

"And we must be honest to say this with the players, but at the same time you have to know the real situation. This group of players did the best [they could] in this season and our fifth place was the position we deserved.

"But to finish in this way, with an important trophy like this shows a great commitment and desire from my players to finish the season in the right way despite the great difficulty."