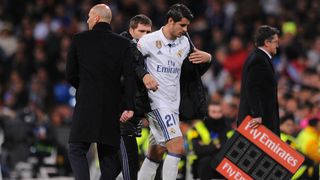 Alvaro Morata joined Chelsea against the wishes of Zinedine Zidane as he did not want to spend another season among the Real Madrid substitutes.

The Spain international signed for the Premier League champions in July for a reported club-record fee of £58million, despite having only returned to Madrid the year before.

Morata made 43 appearances in all competitions last season but only 19 of those came as a starter, with Karim Benzema preferred as first choice.

The 24-year-old says his desire to "grow up" and force his way into the Spain starting line-up for next year's World Cup prompted his decision to turn his back on Madrid for the second time in his career.

"Zidane wanted me to stay and I was happy in Madrid. But I couldn't stay to be a substitute," Morata, who joined Juventus in 2015 on a permanent deal, told the Daily Mail.

"You reach a point that you need to play, to grow up, to escape a comfort zone. It's about being comfortable. I don't want that. I am ambitious and hungry to succeed.

"For Spain, the more I play, the more goals I score, the more chance I have of making the World Cup and starting games."

Morata was heavily linked with a move to Manchester United before they signed Romelu Lukaku – a reported Chelsea target himself –  from Everton, while AC Milan were also said to be interested.

The striker admits he had offers from United and other suitors and at one stage did not believe the chance to join former Juve boss Antonio Conte at Chelsea would arise.

Once the offer from Stamford Bridge arrived, though, Morata says he had only one choice in mind.

"I had various offers, not only Chelsea and Manchester United but also from different leagues," he said. "It was a good situation for me. The most important and best conversation I had was with Conte, he wanted me to come here.

"At the start of the summer, I didn't know that Chelsea were interested in me. I thought they were in for a different player. Maybe Lukaku or maybe someone else, I don't know. I didn't think the option of Chelsea was open.

"But I spoke with Conte several times and not only this summer. I felt in debt to him. He signed me for Juventus but left very quickly to manage Italy. I always wanted to play for him after that. It was only two months with him but it felt like I'd known him forever. When I knew he wanted me this summer, I didn't think twice. I did everything I could to make the move happen.

"Last summer, it was close. Cesar Azpilicueta was a bit annoyed because he had already started house-hunting for me. We'd even got estate agents on board. This time Cesar has sorted everything!

"When I spoke to Conte last summer, I said 'If I'm going to leave Real Madrid, it will only be for Chelsea'."

Morata has enjoyed a strong start to life in England, scoring three goals in four league appearances, and he has explained how training with the elite at Madrid and Juve has helped him to acclimatise quickly.

"At Real Madrid, I did heading drills with Cristiano Ronaldo. You see him go up for headers, that spring and power, he is a real beast. At Juventus, I saw Fernando Llorente, how he finds space and directs his headers.

"I like the physical challenge. Last week, I played against Wes Morgan and Harry Maguire – big guys. Cesc Fabregas was putting in good corners that I thought I could get to and bury but there were some coming in and I couldn’t even get a jump up against those guys.

"But then I got between them to score. You have to be clever. I'm not worried. At Juve, I trained against Giorgio Chiellini and Leonardo Bonucci every day.

"I think the Italians saw this handsome kid coming from Madrid, where it is a bit softer, and it was a good education. They were great mentors."