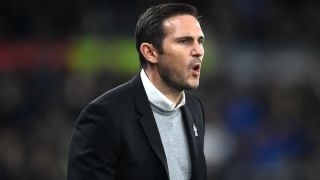 Bielsa admitted spies had watched each of their opponents this season, the issue having been raised when a Leeds employee was caught outside Derby's training ground ahead of their clash last Friday.

The Argentinian faced widespread criticism for his actions, including from Lampard, and said it was not an isolated incident.

Speaking after his team's FA Cup penalty shoot-out win over Southampton, Lampard was unhappy with the step taken by Bielsa.

"It's certainly a league issue now because it's the league, it's every team, so it's up to them to decide what goes from now," he said.

"It's probably a nice eye-opener for the fan to see it because most of these things are done behind closed doors. They're done everywhere so there's no amazement from anyone who works in football, would not be amazed in the slightest, it's par for the course."

Leeds issued a statement after the Derby game reminding Bielsa of his responsibilities, while investigations have been launched by the English Football League (EFL) and Football Association (FA).

Bielsa's side hold a four-point lead atop the Championship table.