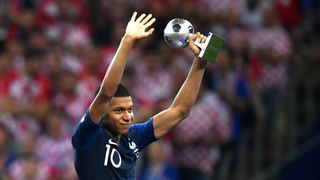 Mbappe netted in France's World Cup final win over Croatia on Sunday, becoming the second youngest player, after Pele, to net in the showpiece match.

The Paris Saint-Germain star is also the fourth youngest player to win the sport's most coveted prize, while only Pele has scored more goals at the same finals competition before his 20th birthday.

The Brazil icon, a champion in 1958, 1962 and 1970, seems to be worried by Mbappe's progress, as he cheekily congratulated the Frenchman on Sunday.

"If Kylian keeps equalling my records like this, I may have to dust my boots off again," Pele posted on Twitter in reply to Mbappe's picture of himself and the World Cup trophy.

If Kylian keeps equalling my records like this I may have to dust my boots off again... // Se o continuar a igualar os meus records assim, eu vou ter que tirar a poeira das minhas chuteiras novamente... July 15, 2018

Pele, like Mbappe, won the Best Young Player award at his first finals in 1958.