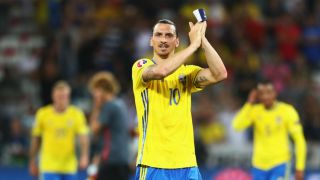 Manchester is set to become the "capital of football" after Zlatan Ibrahimovic announced Manchester United as his next destination, according to former team-mate Patrick Vieira.

Ibrahimovic took to social media to reveal he is to join United ahead of the 2016-17 campaign, though the club have not confirmed the deal.

The 34-year-old former Sweden captain, who announced his international retirement at Euro 2016, has been a free agent since departing French champions Paris Saint-Germain, who he guided to four successive Ligue 1 titles, scoring 38 league goals last season.

And former Manchester City midfielder Vieira - now coach of MLS side New York City FC - has endorsed Ibrahimovic's switch to Old Trafford, talking up Manchester as the place to be with Jose Mourinho and Pep Guardiola set to go head-to-head in the Premier League.

"He is a good friend of mine and we spent time together at Juventus and at Inter," Vieira said.

"We are still in touch once in a while and we have massive respect for each other.

"What I really like about him is his character - he is a winner, a guy who can drive the team because of his character and that is a very good signing for Manchester United.

"I spoke to him this morning - he said that he decided to go to United and he believes that is a very good decision for him. Of course I will wish him good luck and I will be following him.

"Look at the two managers in Manchester; look at Ibrahimovic; [Sergio] Aguero on one side, [David] Silva, [Wayne] Rooney. I think Manchester is the capital of football."