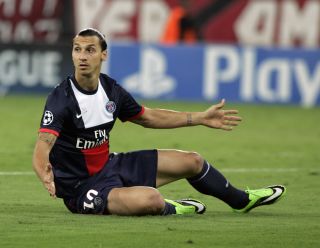 The 31-year-old has secured a vast array of trophies over his career, including four different league titles, but is yet to lift a European trophy and feels he could do so with the French champions.

They have some way to go though, and they will first need to beat Benfica on Wednesday to continue their campaign that started with a 4-1 win over Olympiacos.

Ibrahimovic knows they will not have an easy time against Jorge Jesus' side, but is confident in his team-mates' abilities and hailed his burgeoning partnership with Edinson Cavani.

"I have a lot of dreams and winning the Champions League is one of them," the Sweden international said.

"I think Paris Saint-Germain can do it. It is not an easy competition, but we are here to win it. Last year, other clubs were asking who we were. This year, they respect us.

"The coach has given the players a lot of confidence. He trusts us and we are repaying him. He manages the personalities very well, despite the number of players and the problems that can create.

"I'm scoring less this season and I think that's positive. It's better to have many good scorers than just one. I don't think of myself and Edin is the same. We play for the one who is better placed."

PSG are unbeaten at the Parc des Princes since November last year, but coach Laurent Blanc is expecting a tricky tie against Benfica, despite their stuttering start to the Primeira Liga season.

He said: "Benfica is a team that likes to dominate their opponents in the league to impose their style.

"Will they have this mentality in the Champions League? I do not know. We know our intentions, not theirs.

"I do not know if they will be careful and have to take risks.

"We know their team very well. We saw them play several times since the announcement of our group."