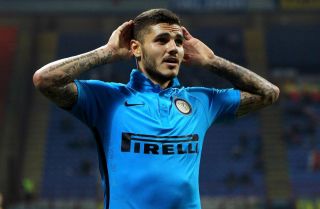 The Argentina international scored for Walter Mazzarri's side with just five minutes remaining, after Danilo D'Ambrosio had bagged his second goal in as many Europa League games after quarter of an hour.

It was a timely victory for the Milan outfit who suffered a humiliating 4-1 home defeat to Cagliari in Serie A last Sunday.

Icardi believes that loss gave Inter extra focus, while he was also happy with his link-up with strike partner Pablo Daniel Osvaldo.

"We wanted the victory and to get back on track after that terrible defeat to Cagliari," he told reporters. "We achieved it.

"Osvaldo gave me a great assist and he'd tried to find me with other passes that had been intercepted. I tried to set him up for a goal too, but he was tired and didn't finish it off."

Centre-back Marco Andreolli echoed Icardi's sentiments and was happy that Inter were able to win the Group F clash without hitting top gear.

"When you're coming off of a defeat like last Sunday's it's important to have the chance to get straight back out there," he commented.

"I don't think we were at our sharpest but we got the win and consolidated our grip at the top of the group.

"We were really set in our minds, really determined. We did make a few mistakes but the main thing is that we sent out a clear signal."