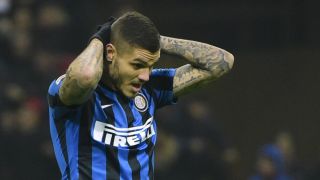 Inter skipper Mauro Icardi has revealed he has received offers from other clubs, but is adamant he has no intention of leaving the Serie A side any time soon.

The Argentine attacker has been heavily linked with a move to the Premier League in recent months, with Manchester United and Arsenal believed to be among his admirers.

Nevertheless, Icardi is not interested in a transfer and is desperate to lead Inter to success.

"I've had a few offers but I want to stay here and lift trophies with this club," the 23-year-old told Inter Channel.

"I'm the captain and I want to achieve great things with Inter.

"I've always shouldered my responsibility ever since I joined the club and I think the fans appreciate that.

"I've been given this opportunity as captain and I'd love to become a club legend like [Javier] Zanetti. Anyone would want to enjoy the same success he had."

Inter have dropped to fifth place in the table after a number of disappointing results, but Icardi has not given up hope of finishing third and securing Champions League football.

"We had a superb first half of the season, but sadly the second half hasn't gone as we wanted," he added.

"We have to aim for third place now to get where the club wants to be and start playing European football again."

Icardi has netted 11 goals in 23 Serie A outings this term after scoring 22 times in 36 league games last season.