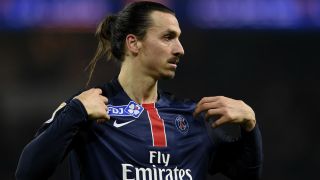 Zlatan Ibrahimovic would be ideally suited to a move to the Premier League, his agent Mino Raiola has said.

The Sweden star's contract with Paris Saint-Germain expires at the end of the season and the future of the 34-year-old remains far from certain.

A return to Serie A with AC Milan and a switch to MLS have both been mooted, while Ibrahimovic himself has stated that a move to Qatar is an option, but Raiola believes a spell in England's top flight would be good for the player.

"I would like to see him in the Premier League," Raiola told Sky Sports News. "I think it's a game that is made for him with his strength. his ability, his technique, the stadiums with fantastic atmosphere and how football is lived.

"It's difficult now because for the first time in his life he wants to be a free agent so that he can look around and have a feeling day by day what he wants to do.

"There are a lot of projects on our table but he has not decided yet. Can he go to England? In theory yes he can because he will be a free agent and for sure there are some clubs always interested in him. What we will do at the end, I really don't know."

Ibrahimovic has ruled out leaving Parc des Princes before his contract expires and Raiola has likewise stressed there will be no chance of a January transfer.

"He will definitely stay with Paris Saint-Germain until the end of the season," he added.

"He wants to be with them, they want to be with him. We have a very strong relationship with the club. He will not leave in January."