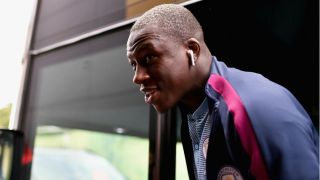 Benjamin Mendy said he will be reunited with Manchester City manager Pep Guardiola in the Champions League semi-finals as he continues to recover from an anterior cruciate ligament injury.

The 23-year-old had only arrived from French champions Monaco in a deal in the region of £50million in July.

Mendy, however, has set his sights on returning for the final four of the Champions League, which is schedule to get underway in April.

"I told Pep after I got my results I would only have surgery if he promised me City would be in the Champions League semi-finals when I come back," Mendy told The Times.

"That is our checkpoint. That is where we will meet again.

"I want to get back fit as soon as possible," Mendy added. "I want to play in the Premier League, the Carabao Cup, the Champions League, the FA Cup, and there's no doubt in my mind that I will play in the World Cup.

"You know what I'm like when I play with City, I always have a smile on my face and it's the same with my rehab."

Premier League leaders City – who are five points clear atop the summit – travel to West Brom on Saturday.