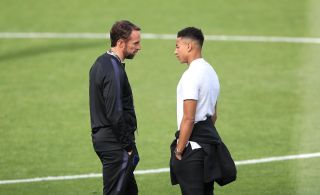 Manchester United’s Jesse Lingard has pulled out of the England squad through illness.

A poor start to the season meant the 26-year-old was a contentious selection for the Three Lions’ Euro 2020 qualifiers against Bulgaria and Kosovo.

Lingard missed training on the eve of Saturday’s Group A match against Bulgaria and was conspicuous by his omission from the 23-man England squad submitted to UEFA.

#ThreeLions midfielder @JesseLingard has returned to his club through illness.— England (@England) September 7, 2019

The Football Association later confirmed that the attacking midfielder will play no part for Gareth Southgate’s men during this international break due to illness.

Lingard is the second player to withdraw from England’s initial 25-man squad after Manchester United team-mate Aaron Wan-Bissaka left on Tuesday due to a back issue.