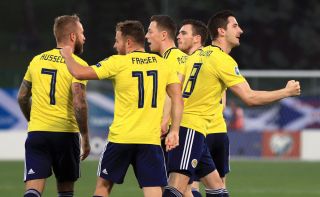 Kenny McLean is “100 per cent” enthusiastic for Scotland’s European Championship qualifying double-header in June regardless of who will be national team boss.

The Scottish Football Association is searching for a new manager following the sacking of Alex McLeish, which came after a shock 3-0 defeat in Kazakhstan in their opening group game in March was followed by an underwhelming 2-0 win over San Marino.

McLean scored his first Scotland goal that night and wants to build on that boost against Cyprus at Hampden Park on June 8 and away to Belgium three days later, and he still harbours hopes of qualifying for Euro 2020.

The 27-year-old Norwich midfielder told Press Association Sport: “The honour is going to be there for me until I am not fit enough to play.

“I will always make myself available for Scotland. Whoever comes in, if I’m fit I will be available.

“Obviously the last couple of games didn’t go as planned and obviously the manager losing his job wasn’t good for anybody.

“Alex was brilliant, a great guy. Whenever I was fit I was always involved in his squad. I have a lot to thank him for.

“You don’t like to see anybody lose their job. Obviously it happens a lot in football, people come and go, but when the manager has done you well it’s obviously sad to see him go.

“But personally, I want to be involved in as much as I can, same as any Scottish player.

“I started the last game and got my first goal and it was a proud moment and a good occasion for me. But there are plenty of Scottish boys out there doing very well so it was an honour to be involved again.

“Obviously the result in Kazakhstan was a bit of a stumbling block but I think we can get back on track in the summer.

“We just missed out on qualifying when Gordon Strachan was in charge but we had a right go and had a good run of results, so that is what we look to do again.”

Norwich have been promoted to the Premier League and will clinch the Sky Bet Championship title with a point at Aston Villa on the final day this Sunday.

McLean, capped six times, has contingency plans in place in the event he is included in the summer squad by the new Scotland boss.

The former St Mirren and Aberdeen player said: “There are about four weeks between the last Norwich game and when Scotland will meet up.

“My plan would be to go on holiday, chill out and then the week before we met up, I would go back to Norwich and do a bit with the sports science team.

“A few of the boys at Norwich will be involved in international duty and they are in the same situation, so the plan is for a few of us to come in and do a bit and get us ready for international games.

“That’s all going well and me being involved in the squad.”