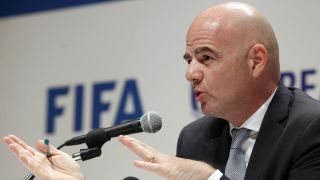 Gianni Infantino has hit out at the "fake news" and "FIFA bashing" he claims is being aimed at world football's governing body.

Infantino's passionate speech comes during a week in which FIFA prosecutor Cornel Borbely and ethics judge Hans-Joachim Eckert lashed out at the decision to remove them from office, despite "several hundred" cases of suspected corruption remaining unresolved.

"We need your support to rebuild FIFA's reputation. One man alone cannot do anything," Infantino told the congress.

"We are a team. Sadly the truth is not necessarily what is true, but it is what people believe is true.

"FIFA bashing has become a national sport, especially in some countries. I understand also why, it was right, but FIFA has changed now.

"This is a new FIFA. We are new people here, we act with facts not with words. Facts and actions speak louder than words.

"It is normal that in a big organisation like FIFA there are arguments, disagreements, fights, disputes before a decision is taken, it's absolutely normal.

"But what matters in the end is the decision taken and implemented, the rest is all speculation."

FIFA Congress LIVEOur live stream has begun. Follow all the events in Bahrain as they happen.May 11, 2017

Infantino was elected president in February 2016, succeeding Sepp Blatter after a corruption scandal prompted the downfall of the long-term supremo.

"Let's start by speaking about something which is not football, but which unfortunately due to the happenings of the past has become a daily business of football," the former UEFA general secretary added, referring to the continuing fallout from an investigation, led by US federal prosecutors, into wrongdoing by FIFA officials.

"We have to speak about reforms, good governance, accountability. In the past many highly paid experts have been hired to help reform FIFA. But let me ask you what did they do?

"They simply rubber-stamped a sick and wrong FIFA. That is not me saying it but a criminal court saying it all around the world.

"Let me say this loudly and unequivocally, a big thanks goes from my side, from FIFA's side, to all the authorities prosecuting those involved in corruption in football.

"Where were all these compliance gurus when FIFA was failing? They failed miserably. That's not me saying it, that is the facts."