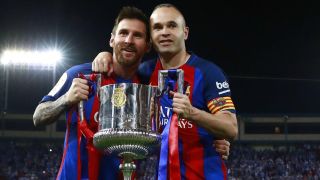 Andres Iniesta's future remains up in the air after refusing to commit to Barcelona as the Spanish veteran evaluates his Camp Nou career.

Iniesta cast his Barca future into doubt before Saturday's Copa del Rey victory over Deportivo Alaves, when he admitted he was unsure whether he would stay beyond the end of his contract in 2018.

The 33-year-old midfielder – who only started 13 LaLiga matches in 2016-17 as Barca surrendered their crown to bitter rivals Real Madrid – attempted to clarify himself but his future is still far from certain.

"I never said I wasn't going to renew my contract, but rather to evaluate a lot of different things," Iniesta – winner of 29 trophies at Barca – told Onda Cero. "It isn't an economic matter.

"There are several factors that have joined together, personal, the moment of the season, and it hasn't been easy.

"I need to make an honest decision and one that is best for everyone."

Ernesto Valverde could have a big say in Iniesta's future after his appointment on Monday.

"I didn't know about Valverde until it was announced," Iniesta said. "I've talked to him a few times but not much.

"I believe he has a great support team that work hard and hopefully he has a lot of luck so we can achieve things together.

"He's had good vision at the teams he's been at thus far and this is another step for him."