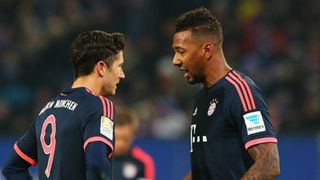 Bayern Munich defender Jerome Boateng says his adductor injury has hit him hard, but he does not expect to miss Euro 2016 with Germany.

The 27-year-old will reportedly be out for at least three months of action after picking up the injury in Friday's 2-1 Bundesliga win over Hamburg.

Boateng has found the blow tough to take, but he is confident that the problem will not prevent him from appearing for Germany in France as they look to add the European title to their world crown.

"I have never had a serious muscle injury before in my career," the centre-back told Kicker.

"I will not be in a great mood in the upcoming weeks, because I am unable to let off steam on the pitch.

"I was shocked and very sad on Friday and Saturday, but I am already looking ahead again.

"I should be fit in time for Euro 2016. It is all about reaching my normal level again once I return."

Boateng's absence leaves Bayern with a key gap to fill after he appeared in 17 of their 18 Bundesliga matches this season.

Joachim Low will be hoping the former Manchester City stopper, who has 57 caps, does recover in time for Germany after he started in all seven of their matches at the World Cup in 2014.