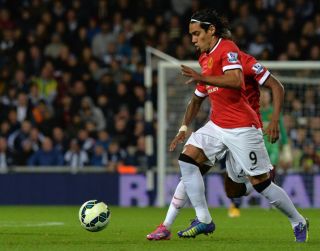 Falcao was a second-half substitute against West Brom on Monday due to jet lag but the on-loan striker could miss the Premier League blockbuster after sustaining a knock in training.

United manager Louis van Gaal insisted the knock was not knee-related, a relief for fans after the Colombia international missed the World Cup because of a ruptured anterior cruciate ligament suffered in January.

With captain Wayne Rooney set to complete the final game of his three-match ban and Robin van Persie struggling for form, Van Gaal is desperate to have the 28-year-old at his disposal for the visit of the Premier League leaders.

"He got a kick in the morning [on Friday] so we have to wait and see if he's fit enough," said Van Gaal. "But it's not a knee problem.

"He had a knee problem but not anymore. We have to build Falcao up, that I have also said in the first press conference when he came to our club.

"It is difficult because we are playing [games] already, that’s difficult but we have played him because I like the way he was playing so we play with two strikers.

"Now I have to choose between two strikers, even three because [James] Wilson can also play, the younger player."

Falcao has scored once since joining United from Ligue 1 outfit Monaco on a season-long loan deal on deadline day last month.