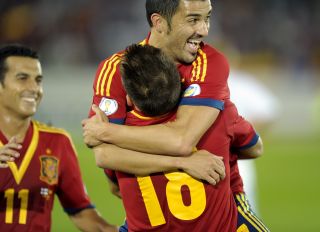 The 31-year-old was expected to lead Spain's forward line, after Fernando Torres was ruled out with a knee injury and Tottenham's Roberto Soldado was omitted from the squad.

But Atletico announced on Sunday, via their official Twitter account, that Villa is suffering with a problem to his left ankle and will be unavailable for the upcoming Group I fixtures, to be played on October 11 and 15.

Villa has scored two goals in eight La Liga appearances since joining Atletico in the close-season, with the club winning all eight of their games in the league so far to sit second.

Spain top their qualification group on goal difference and have a game in hand over France, who are second and also have 14 points.

They will guarantee their place at next year's World Cup if they can defeat both Belarus and Georgia.

Elsewhere, Spain have drafted in Real Sociedad central defender Inigo Martinez after Napoli's Raul Albiol withdrew from the squad on Saturday with a leg injury.