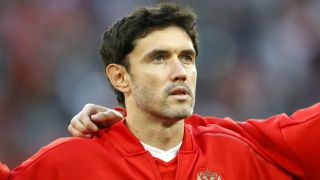 Yuri Zhirkov will continue to undergo treatment on a calf injury as he battles to be fit for Russia's World Cup quarter-final against Croatia.

The Zenit defender was substituted at half-time during his country's last-16 tie with Spain last Sunday, with the host nation going on to win on penalties to progress in the tournament.

After undergoing medical tests, Zhirkov has been diagnosed with an inflammation of a tendon in his calf, leaving him in a race against time to be ready to play on Saturday.

"In the coming days he will undergo treatment at the location of the national team," Russia's official account revealed on Twitter. "The exact terms of his return at the moment cannot be revealed."

Vladimir Granat replaced his compatriot at left wing-back against Spain and could be asked to continue in the role for the last-eight clash in Sochi.