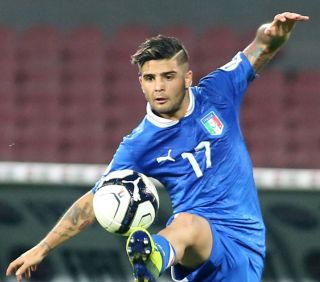 Cesare Prandelli's side had already confirmed their participation at next year's FIFA World Cup, and ended their Group B European qualification campaign with a 2-2 draw with Armenia at the Stadio San Paolo.

Italy twice had to come from behind to secure a point, as goals from Alessandro Florenzi and Mario Balotelli cancelled out Yura Movsisyan and Henrikh Mkhitaryan strikes.

The draw means Italy ended the pool unbeaten with six victories and four draws from their ten fixtures.

And Insigne was delighted to feature on his home ground, and has set his sights on securing a place in Prandelli's squad for Brazil 2014.

Speaking to RAI Sport, the 22-year-old said: "It was emotional for me to play in Naples, in front of my fans.

"I have to thank the fans that welcomed me, even if we didn't win because of bad luck that prevented us from scoring.

"I am doing my best in the championship to win Prandelli's faith and I am always available to give my best for this jersey.

"It is a comforting stat (being unbeaten), as it is important to not give up and stay in the match until the end. Now I hope to be called up for the World Cup in Brazil."

Insigne has now set his sights on Napoli's top-of-the-table clash with Roma at the Stadio Olimpico on Friday.

Rafael Benitez's charges trail Roma by two points at the summit of Serie A, and Insigne admitted he is wary of the threat posed by veteran playmaker Francesco Totti.

"It will be a great match. We will go to the Olimpico and try to play our own game. I fear Totti from Roma," he added.